Let's learn Japanese with Godzilla! The most famous fictional beast of all time.

I'm sure you know Godzilla is ゴジラ in Japanese, but did you know that ゴジラ is a blending of ゴリラ (gorilla) and クジラ (whale)?

In 1954 Toho stunned the Japan with a movie about an ancient giant monster whose habitation was disturbed by atomic bomb testing. Having been freed from the depths, ゴジラ decides to visit Tokyo.

The original movie is worth seeing. If you are a Kurosawa fan (come on, you're studying Japanese, being a fan is kind of required, isn't it?), you'll recognize the paleontologist Yamane . The actor's name was Shimura Takashi (Wikipedia: https://en.wikipedia.org/wiki/Takashi_Shimura ). He was the samurai leader in の (Seven Samurai) and starred in 21 of Kurosawa's 30 films.

We watched ゴジラ (1954) last night and I was most struck by the fact that, at the time of filming, WWII was less than a decade in the past. To see Tokyo destroyed—and by a radioactive beast at that—must have been doubly shocking to the original audience. We may smirk at the "rubber suits," but if you squint your eyes, the special effects are remarkable even today. 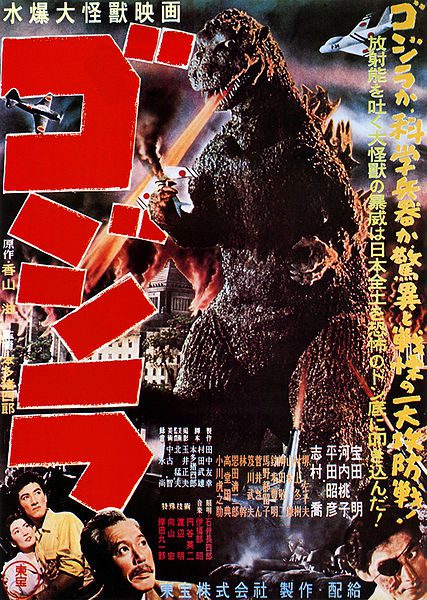 I picked a few lines for us to break down today. Let's get started!

First, the professor is examining a large depression in the ground.

(Paleontologist  Yamane to a reporter) If I were to say this is the footprint of a living creature, would you trust (what I say)?

(Paleontologist  Yamane) This footprint is radioactive.

(Paleontologist  Yamane to his daughter, Emiko) Emiko, I certainly… We certainly saw it.

(Paleontologist  Yamane) In the legends of Ooto island, it is the incarnation of a fierce god whose name is … "Godzilla."

(People running for their lives after seeing Godzilla pop over a mountain) Run away! It's Godzilla!! Godzilla has come!

(Paleontologist  Yamane) That creature has been alive since the Jurassic period and normally is on the ocean floor. However, it may have risen to the surface as a result of the H-bomb tests.

I don't think that Godzilla is the last of his kind. If the hydrogen bomb tests continue, the likes of that Godzilla may appear again somewhere in the world. ....