Learn how to say "give" and "receive" in Japanese with あげる, くれる, and もらう. To keep things as simple as possible, we will look closely at あげる and くれる (to give) first and then we'll turn to もらう (to receive).

If the above image has you scratching your head, don't worry! We'll go through it in detail below. Just be prepared to stop thinking in English terms. You'll have to rewire your brain to think like a Japanese. (Cue: The Vapors' Turning Japanese)

Compare English and Japanese "to give"

In English we use the verb "to give" to mean to send something to someone. It doesn't matter who the subject or sender is.

You may have learned あげる means "to give" but あげる wouldn't be used in the second sentence. You would use くれる.

In these cases, both あげた and くれた would be translated as "gave" in English.

Spend a moment comparing the English to the Japanese.

In English, the subject is the giver. In Japanese, for both あげる and くれる, this is also the case. (We’ll get to もらう later which is backwards; もらう has the receiver as the subject/topic. This is from the receiver’s point of view.)

With Japanese, you have to consider the position of the giver in relation to the receiver.

To the English mind, we are all equal and therefore we rarely change our language to suit the situation and context. But to the Japanese mind, the situation or context and the relative relationship between people is very important.

This leads us to a discussion of うち and そと. 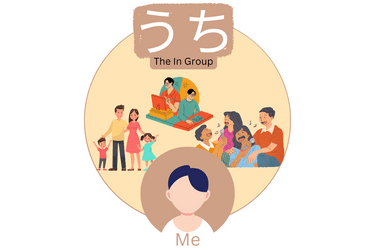 the "in group" or “one’s inner circle”

[うち means “inside.” This starts with oneself and includes one’s family, friends, coworkers, and other groups that you belong to.] 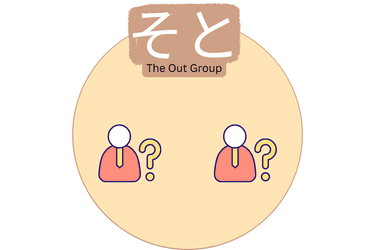 the "out group" or “one’s outer circle”

[そと means “outside.” This includes people you don’t know very well or at all and people outside any group you belong to.]

The うち and そと concept is pretty easy to grasp, but the hard part is to stop thinking in English and to begin to think in Japanese. The good news is, once you grasp the concept of うち and そと, it will also greatly help you with  or polite Japanese.

Just remember that うち starts with the individual (me) and includes any people related to me (you) or anyone in any group you belong to.

■  When to use あげる: From small to big; inside to out

Use あげる when going from yourself, the smallest circle out to the bigger うち circle or out to the even bigger そと circle. In other words, it’s a motion going from small to big, うち to そと.

For example, when you give something to your sister, you use あげる. Why? because you are going from the smallest circle (me) to a larger circle (sister as part of your うち).

This is also true when going from the うち to そと. Use あげる when your sister gives something to someone outside your group.

Mr. Tanaka is outside our group, そと. How do you say, "I gave Mr. Tanaka a book”?

First, who is the giver? That would be "I" and "I" is the smallest circle in the うち group. The book is going out to Mr. Tanaka who, for our example, is outside our group, そと. The giving action goes from small to large, narrow to wide, inside to out.

■  When to use くれる: From big to small; outside to in

Use くれる to mean “to give" when going the other way. From そと to うち and from うち (family or friends) to oneself.

Since we are going from a large circle, そと, to small, うち, we can't use あげる. Why? Because あげる only goes from small to large or within groups.

We use くれる instead. The good news is, the format is the same:

It's the same sentence form as あげる. That’s right. あげる and くれる only differ if the giver is in a smaller circle or a larger circle.

Also, use くれる when receiving something good that wasn’t necessarily asked for.

You don't use くれる for bad things, only good things like gifts or good advice.

Can you figure out whether this will use あげる or くれる?

This time, Mr. Tanaka doesn't give me the book, but he gives it Mrs. Aoki who is also outside our group. This is between two people of the same group, the そと (from my perspective).

First, remember さん can be used with males and females and doesn't express marital status. Therefore, さん can mean both “Mr.” and “Mrs.”

Second, since it involves two people of a same group (そと), we should use あげる.

Before moving on, let's make sure you understand that both あげる and くれる are translated as "to give" in English.

But unlike English, we need to consider the social status of the giver or the subject. 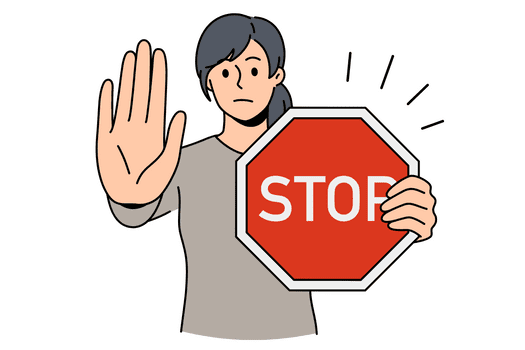 Before moving on to もらう, stop and make sure you understand:

What about the third verb? もらう?

もらう means “to be given.”

It's all about who the topic / subject is:

And the に (when referring to giving physical objects, から could also be used) indicates the giver.

In other words, the は and に positions switch meanings.

Just to make sure you understand the difference, compare the format for the three verbs:

Here's how to say, “Mr. Tanaka received a book from me.”

In the case of もらう, から can also be used instead of に, but only when there is a transfer of something physical.

So, さんは、からをもらった is also fine. But since に can be used in any case, it is probably better to just remember to use に.

あげる、くれる、 and もらう are tricky simply because they are so different from English. I would recommend learning three examples such as:

あげる、くれる、 and もらう are tricky simply because they are so different from English. I would recommend learning three examples such as: