What is いる・ある How to Use iru and aru

Japanese has two ways to say "there is" or "there are."

Both show "existence" but they are NOT interchangeable. 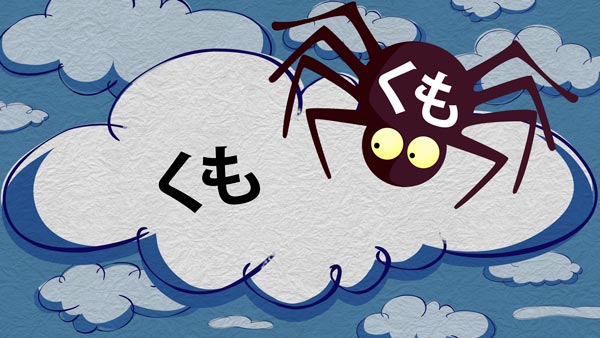 Let me illustrate with the following question:

Do you know the DIFFERENCE in these two sentences?

くも could mean CLOUD or SPIDER.

Both are pronounced exactly the same even with the same pitch accent:

Is it a cloud or a spider?!

If you know the KANJI it is easy.

There is a cloud.

There is a spider.

But there is an easier way. Do you know the difference between ある and いる?

いる shows existence of things that move on their own

Since a cloud is pushed by the wind and doesn't move on its own, it uses ある.
(A cloud may move, but it isn't moving on its own accord)

And since a spider can move, it uses いる.
(A live spider may be very still, but it has the ability to move on its own accord)

There is a cloud.

There is a spider.

Of course, conjugations had to be a little tricky. いる is a Group 2 (-ru verb / ) and ある is a Group 1 (-u verb / ). All this means is the conjugations are different for いる and ある. In other words, you need to memorize the following chart.

If something can move on its own accord, use いる. if not, use ある.