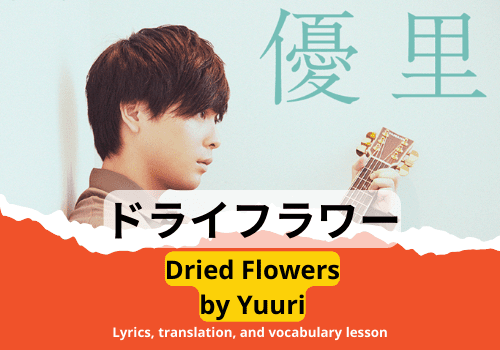 Last time, we went through a strange but fun (and, I think, educational) song (Maneki Neko). This time, let’s get a little serious with a song about lost love and . 未練 means “lingering attachment; lingering affection; regret; reluctance; ruefulness.” 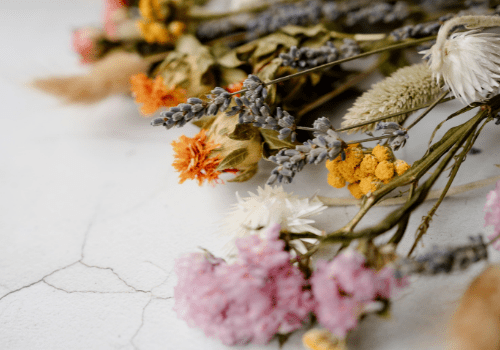 Yuuri is a young, up and coming singer/songwriter you might want to put on your playlist. You can find his music on Apple, Spotify, Amazon, and YouTube. See links below.

The song is about the experiences of a couple who had recently broken up. It appears to be written from the perspective of the woman as she describes their differences and her feelings. For example, in the first verse, the pronoun わたし is used. We suspected this might indicate the song is from her point of view, and the Wikipedia entry confirms it:

The song depicts a breakup experienced by two people from the woman's perspective.

She doesn’t want to see or hear from him, and yet—and yet—she can’t help but reply to his texts.

She still has – unrequited love; lingering attachments to her boyfriend. Or as Frank Sinatra might say, she carries a torch for him.

There are three main sections with a short bridge before the final section.

Notice this line appears three times (once for each section):

The first time, the singer assures us her ex-lover's voice, face, and endearing clumsiness aren’t disagreeable to her.

But the second time, she seems to waver. She uses to show she isn’t as confident about what she thinks of his voice, his face, and his clumsiness.

I probably don’t dislike it even now

After the second time, however, she expresses how she’s been deeply affected by his absence. She sees monsters dancing in the moonlight and “colors” deep within her cause her to remember that she still loves him. This is done not through a memory but through a fragrance. (How poetic!)

Feelings of “I love you” again smell sweet

In other words, she’s a gone a little crazy (with love). Here’s how the official English translation handles the bridge:

I see my demons there dancing in the moonlight

Maybe I am going crazy, losing my mind

Even in darkness I can see the colors shine bright

And then, we come to the third section. By now, all pretense has been tossed to the side. His voice, his face, his clumsiness…

The song is full of useful words and phrases, so I hope you’ll spend some time studying the song using our guide below.

Listen to the song

Learning vocabulary from songs isn’t always the best idea because words are rarely pronounced as they are in normal conversation.

However, new songs often do have useful phrases used in real Japanese conversation but not often found in textbooks. That’s one reason why we recorded Yumi speaking each line individually below in normal, conversational Japanese.

Listen to the recording, understand the words and grammar, and repeat after her.

Video of the Song

Sound File of the Lyrics

Here is a recording of all the lyrics spoken with pauses between lines. See below for breakdowns of every line with individual sound files.

Lyrics in Japanese with Furigana

Japanese Only Lyrics with Furigana

Since this translation is intended to flow with the music, it varies slightly from the Japanese original in a few places.

You know I've been trying to bring it up to you
I guess we're never gonna work it out
Even when we had a tiny apartment for us two
Our conversation was one way, yeah, without a doubt

If we meet again somewhere along the way
Wonder if we can laugh about all that we went through today
I don't even know how, how to tell you the reasons why
Don't wanna cry when you sleep by my side
Yeah, this I know for sure

I see my demons there dancing in the moonlight
Maybe I am going crazy, losing my mind
Even in darkness I can see the colors shine bright

Yellow red and blue calling out your name
From the bottom of my heart, it's so relentless
The love I had for you is trying to break its way free

Line-by-Line with Vocabulary and Translation

Please note, in many cases, due to the poetic nature of songs, other translations are possible.

Perhaps I wasn’t good for you.

After all, the two of us had little to spare

We found ourselves fighting all the time.

I’m sorry about that.

I’ve been meaning to tell you for a while

Surely, we aren’t a match.

In that apartment with just us two

You did most of the talking, you know

If sometime, somewhere, we were to meet

I wonder if you would laugh about today

(I) can’t even exactly tell (you) the reason

(But) I’m tired of crying after you fell asleep

Perhaps, it would have been better without you

You don’t make me cry anymore

“It’s always me” – such words also have gone away

Even that sad parting

in time, I will come to forget

I wonder how you are getting along with someone new

Because I don’t want to see your face again

I wish you wouldn’t contact me out of the blue

You have things your way - you haven’t changed

Even still, I can’t ignore it. Again, I respond

I probably don’t dislike it even now

As time goes by

In the moonlight, a monster sways

Surely, something’s wrong with me too

In the darkness, colors emerge.

red, yellow, dark blue are deep within me

This flower that has yet to wither 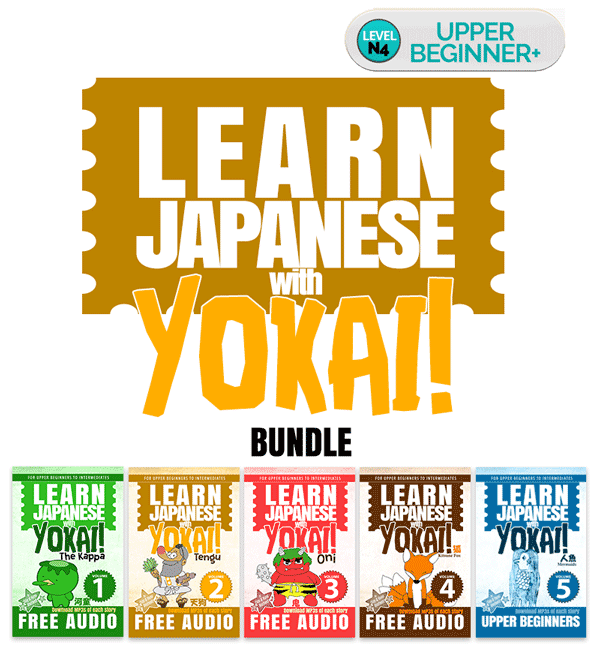 For upper beginners and above.

Want to improve your reading, vocabular, grammar, and listening skills by reading about yokai such as oni or kappas? We have the digital bundle for you.

Living in shadows and the in between worlds of dreams and reality, yokai thrive in Japanese imagination. Yokai are monsters, ghosts, unnatural beings, and even sentient household items. Yokai can be harmless and amusing, or they can be terrifying.