Japanese Pronouns: How to say “I” and “you” In Japanese 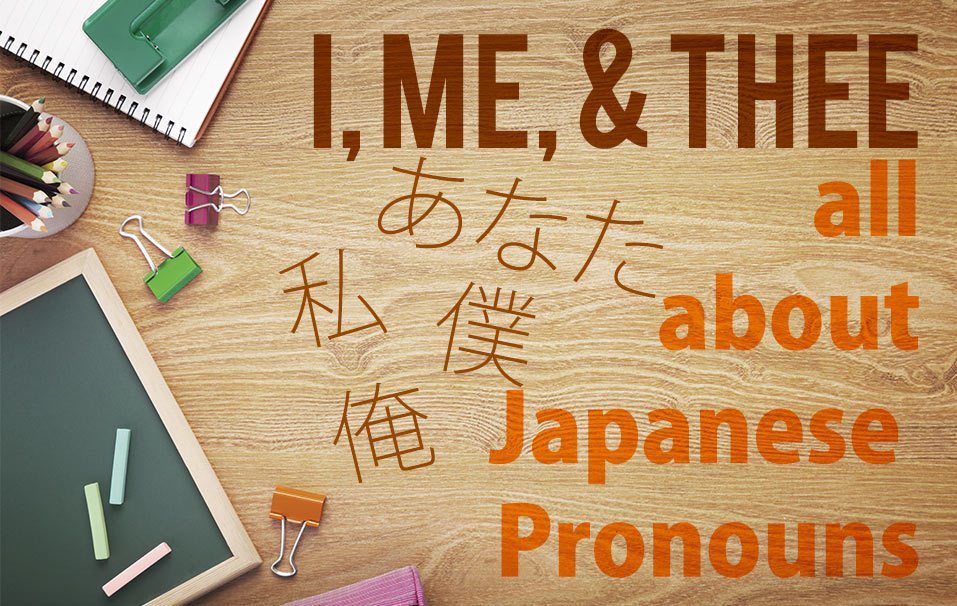 Once the topic or subject of a conversation is established, it is awkward to continually use the pronoun.  And yet, ironically, there are tons of pronouns available for use—even more when considering dialects.

Japanese has tons of pronouns to choose from, but it is often awkward to use them!

As mentioned above, you could, and in some cases should, avoid using pronouns altogether.

That being said, a few well-placed pronouns can enliven a conversation.

This is one reason why Japanese is so much fun. You just can't do this easily with English.

Carl went to the store. There, (he) purchased bread.

You (used with peers and those under your social standing)

How to NOT Use Pronouns

You can get by your entire life with only using  for “I” and あなた for “you,” but not only would that be boring, in some situations it might actually be rude.

あなた, for example, can, in some cases, be rude since it implies you are stating the listener is equal to or inferior to you. And saying  too often can make one sound conceited.

Here are a few ways to get around this:

What do you think, Yumi?

Teacher, may I go to the bathroom?

INSTEAD OF PLURAL PRONOUN

In short, if you can avoid using a pronoun whether through context or substitute, do it.

I; me
[formal or informal; gender-neutral]

one’s own…
[usually used with の to talk about one’s household: うちの  my (our) dog]

you
[usually said to people on a similar or lower social status; often used by wives to address their husbands like “dear” or “sweetheart”]

you
[informal; used among friends; it's the same kanji as the name suffix -kun. Often used with .]

she; her
[can also be used to mean “girlfriend.”]

【わたくし】 I; me [more formal then just わたし; uses the same kanji as わたし; gender-neutral]

I; me [literary style; formal]

my (or can be plural: our as in がour company) [gender neutral]

we [formal; used when speaking on behalf of a company or group]

I [a shortened form of わたし used commonly by women]

I [gives a sense of masculinity; can be rude in some situations]

I [used by males of all ages, but particularly with boys. Can be used when calling a boy whose name you don’t know: “hey, kid” or “hey, squirt.” The kanji 【しもべ】 means “servant”]

I [often used by older males]

I; me [Edo period slang for

I; me [used by males; samurai pronoun; the kanji means “clumsy person”]

I; me [used by males; has a nuance of arrogance; Natsume Soseki’s famous book, I am a Cat, is called はである.]

I; me [used by males; used by samurai as a first person pronoun, but literally means some unknown person]

I [used by males] Say this after a good meal:  はじゃ。 I am satisfied.

you [used by males and females]

+ Pronouns for When Upset

you [rude; a shortened version of あなた; used when angry]

you [can be rude or can show familiarity (husband to his wife, for example).]

you [rude; historically, this was a formal pronoun the kanji, meaning an honorable person]

him; her [informal; implies contempt; used to refer to someone nearby]

him; her [informal; implies contempt; used to refer to someone away from the speaker and listener.]

I [rural feel; used in anime or manga such as Crayon Shinchan and Dragon Ball characters]

we [informal; like たち, ら is a pluralizing suffix that usually shows familiarity]

[informal: たち we; たち you; can also be added to names, groups, or places: さんたち the Aoki’s (residence)]

he; she
[literally, that person; informal to formal]

he; she
[literally, that person; formal / polite]

she
[literally, that child, but usually refers to a girl or young woman]

our company
[used when representing one’s own company]