Whether you are a beginner or intermediate, let's break down a few famous lines from Natsume Souseki's I am a Cat.

If you would like to read the entire first chapter (which is kind of a standalone short story), click here. 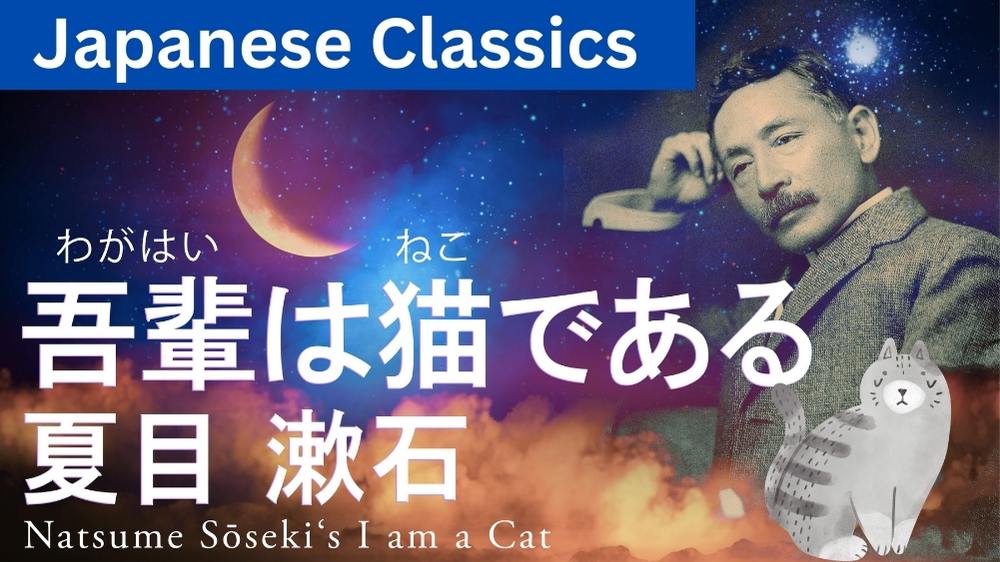 While the story may be too challenging for beginners, I highly recommend all students of Japanese memorizing at least the first line. It's about a cat who would love to spend all his time napping but ends up critiquing the humans (and cats) around him. Learn more about the story or listen while reading by clicking here.

Let's go through a few fun lines from the story.

Table of Contents
I am a Cat...
The most cruel of the human species...
About his master, the scholar...
The truth as seen by the cat...
He can be honest too...
Andrea del Sarto...
The last line...

This is the opening line spoken by the cat. The cat is well educated and uses fairly high-class language such as a literary である (instead of です). The first-person pronoun   is not used in modern Japanese, but if you use it, people will immediately think of this story.

The most cruel of the human species...

Let's break this down by sentences.

Furthermore, I later learned this one was called "a student" which is the most vile class of humanity.

Here, the cat is recalling his earliest memories. His first encounter with a human being was with a lodging student who loved to hold him by his tail and threaten to boil and eat cats.

About his master, the scholar...

The members of the household regard him as a scholar.

He, himself, works hard to appear as such.

The cat's master is a teacher who shuts himself in his study for hours at a time. The entire household thinks he is a consummate scholar spending all his time engrossed in his studies. The cat, however, knows better as we will see with the next line.

The truth as seen by the cat...

Sometimes, I stealthily take a peek into his study, but

often he is napping.

At times, his drool spills out upon the book he had been reading.

We humans can fool other humans, but not an observant cat! Beware!

Indeed, he speaks the truth.

With the なるほど, the cat seems a little surprised by his master's candid confession to his friend who is an authority in aesthetics and art. His master had recently taken up painting but he quickly discovered it isn't as easy as it seems. His master admits he is no good at painting. The cat hears his master say this to a friend and makes this comment.

I had no idea. I say, this is most amazing.

truly | just like that | (quotation marker) | master | as for | recklessly | admiring

Behind the guest's gold-rimmed glasses, I noticed a hint of a derisive smile.

His aesthetics expert friend, who is described here by his gold-rimmed glasses, makes up a quote by the Italian painter during the Renaissance. The quote is an artist should look to nature rather than just one's imagination. The cat's master takes it to heart. Later, the cat wakes from a nap to find his master staring at him with brush in hand. Unfortunately, the cat has to pee...

But that comes later. In this quote, the friend sets up the gullible master with a made-up quote.

I still have not been given a name, but

there is no end to one's desires.

I intend to live out the rest of my days as a nameless cat here in this teacher's house.

The story ends as it began: about a cat with no name. But he is somehow content to be just where he is.

I hope you enjoyed this quick look at a few fun lines. If you feel ready to tackle the story, please click here for the audio and an English translation. If you are a beginner, I would recommend at least memorizing the first line. You'll be amazed how useful it is in conversation.

Lastly, if you like this kind of content, please become a Makoto+ member by clicking here. Not only will you support us, but (more importantly) you'll also be supporting your Japanese language learning journey. Makoto+ has tons of material with new lessons weekly.