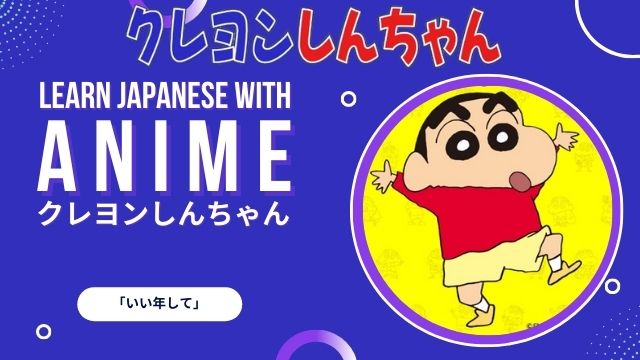 In today’s segment, we’ll focus on the phrase いい年して which means “at your age, you should know better.”

The characters in today's lesson:

Prior to today’s scene, みさえ discovers she is out of rice. Always pinching pennies, she learns about a “couples piggy-back race” where the prize is half-a-year’s worth of rice. She convinces ひろし into signing up.

The 野原 family attempts to practice in a park. ひろし almosts collapses due to the weight of his wife みさえ. Unfortunately, they run into the young lovers ミッチー＆ヨシりん who are also in the park to practice for the same race. ヨシりん bluntly says みさえ is too heavy.

The key phrase for today's lesson is:

As mentioned above, this is used when someone is at an age where he or she ought to know better but does something he or she shouldn’t.

Unbecoming of your age... Immature... You should know better… Act your age!

In addition, for Makoto+ members, we have a beginner-level essay on using いい年して here: https://makotoplus.com/yonde-miyo-23/

[Yoshirin] Wait. You shouldn't do that. It's hard to watch middle-aged couples piggy-back riding.

[Shinchan] That's right. You are not acting your age. It's embarrassing.

[Yoshirin] Besides, no matter how I look at it, Misae-san appears to be heavy.

[Shinchan] She is, in fact, heavy.

[Misae] What are you talking about? That's not true, is it, dear?