Read Japanese Manga with Us: One Piece [with vocabulary and subtitles]

Read Japanese manga with us: One Piece. See below for a complete vocabulary list and transcript.

One Piece is a Japanese manga about a young man named Monkey D. Luffy (モンキー・D・ルフィ) who, with his band of "Straw Hat Pirates," searches for the ultimate treasure called, "One Piece." With this treasure, he will become the King of the Pirates.

Join Clay and Yumi as they walk through the first few pages of the first issue. 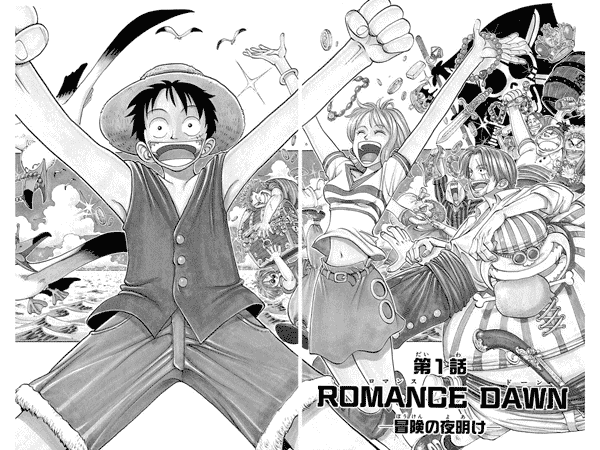 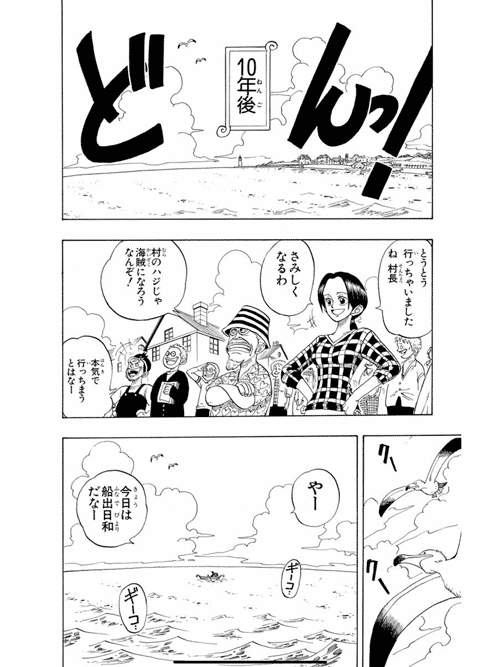 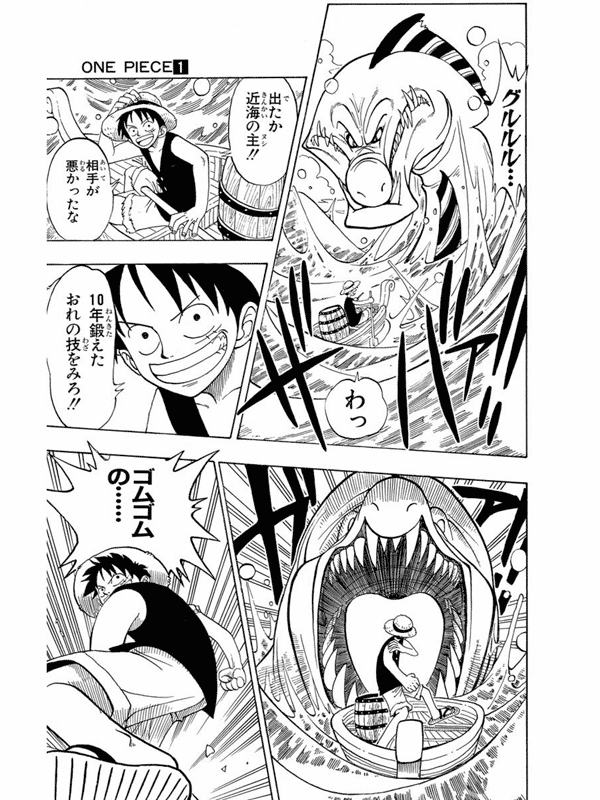 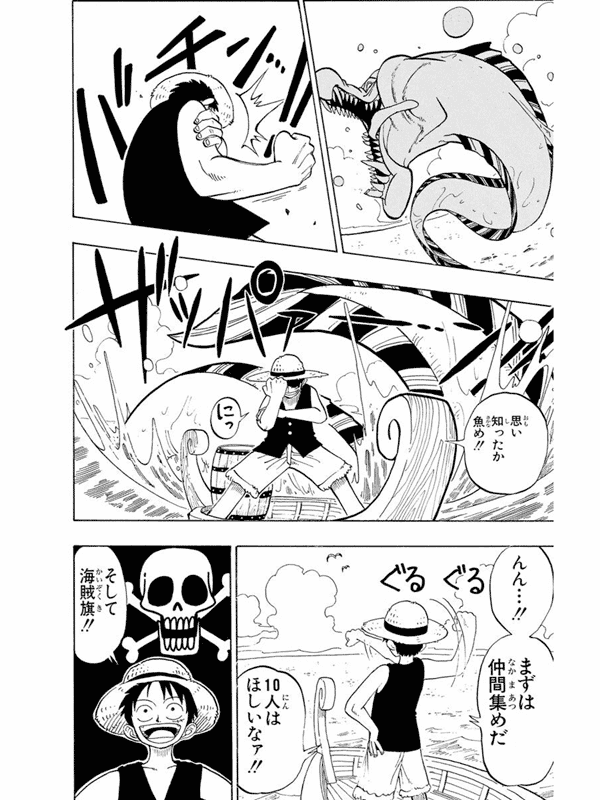 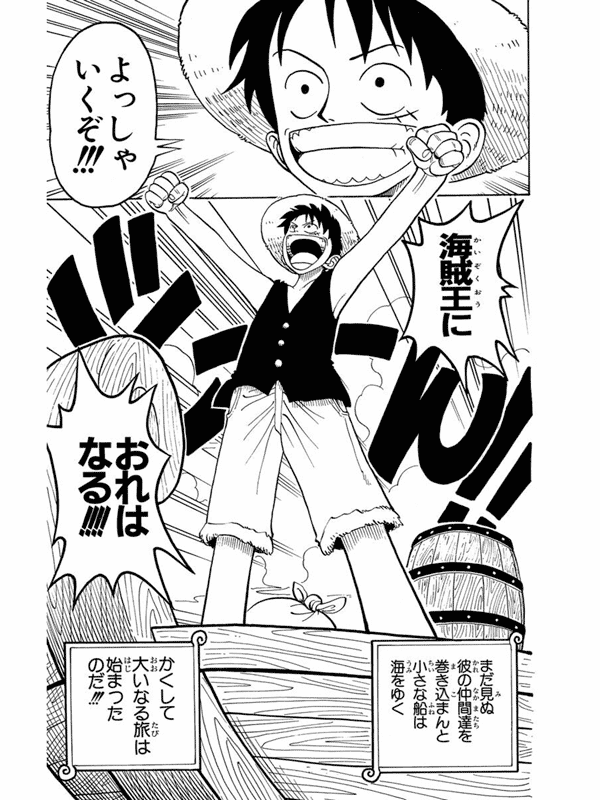 こんにちは、由美です。(Hello, this is Yumi) and this is Clay.

Today we're going to break down a new manga.

It is One Piece

and as I admitted before, I'm not very much an expert on manga or

anime, but I have read the Wikipedia entry on One Piece.

So now I'm an expert on One Piece. Well maybe not,

and we'll see if we can learn a little bit in Japanese.

What is One Piece?

So the introduction which we're not going to cover, talks about ルフィ is the name

of the boy now the young man, but as a boy and he wants to be a pirate.

But what happened in the introduction?

そ、海賊の王様がつかまって、死ぬときに Yes, the pirate king was captured, and when he was to die

自分の財宝、みんなにあげちゃう。見つけなさいといって死んだ。 He will give his treasure to everyone. He said to go out and find it and then he died.

A treasure that... He challenges

people to go find. And I believe this is what is called "one piece," isn't it?

I think Wikipedia said that this is called "one piece."

But anyway, so the pirate is executed

and then we shift to ルフィ (Luffy) Monkey, what's his name?

So it becomes the elastic kid where he can ---.

で、ただ泳げなくなっちゃう。 But, it's just he won't be able to swim.

And that's not very useful.

If you're a pirate, Pirates have to swim well.

As a child he didn't know how to swim, but it also said that if you eat this ゴムゴムの実

ゴムゴムの実, if you eat this special treasure, this fruit, then you will never be able to swim.

But he wants to be a pirate on the seas.

それで、山賊と海賊 And then, mountain bandits and pirates.

山賊とルフィがケンカしてときにその海賊のかしらが When Luffy and the mountain bandits were quarrelling, the leader of the bandits

And this is hero.

But we should mention what's the difference between 山賊 and 海賊？

山賊は山、山というか、ま、あのう、海じゃないところ。 "yama zoku" are mountain, or I should say, a place that's not the sea.

土の上、普通の町とか山の中とか On the ground, a regular town, or in the mountains, etc.

そういうところにいって、人のものを盗んているとか、おそったりする、悪い人。 (They) go to such a place and steal people's stuff or attack people--such bad people.

Like a mountain bandit or bandit on the highway man or something.

And so the san is actually Yama (mountain) and Kai is umi (sea), still both Zoku,

but one is mountain bandit or mountain pirate and the other is ocean pirate.

そうです。そしてその海賊の友だちというか、 Yes, and that pirate friend, if I can call him that

かしらに助けてもらったときに When the leader (of the pirates) came to help (Luffy)

その人は海の主に、海のモンスターに、腕を食べられちゃった。 That person (leader) had his arm eaten by the sea lord or monster.

So this big fish monster eats his

mentor's arm and then suddenly we are ten years later.

Are we ready for that? Okay.

So ten years later and this is where the story really picks up?

So the "Don" it just opens ten years later

And now this we didn't mention her,

pirate, his mentor who did leave a couple of years prior to this, I guess .

とうとう, Finally or after a long time.

It's an abbreviated form.

Sonchou is the village chief and he's kind of dressed like a beach bum.

But he's the village chief

同じです。 They are the same.

So they're the same.

I'm sad or I will miss him so much.

なる implies that from now and then she'll continue to miss him. Sadness.

村の恥じゃ、海賊になろうなんぞ It's the shame of the village for him to become a pirate.

So 村の恥 so the shame of the village

I guess he's talking about Luffy is... What shame!

That he's brought upon the village なんぞ→なんて (why? Such a thing! (exclamation))

so such a thing is becoming a pirate.

It's the shame of the village.

本気で行っちまうとはな He really meant it and left.

Now this are his friends.

They're saying, oh, he really left 本気で with... He really 行っちまうは、行ってしまう

He really left. They always thought he was kidding and he

was always saying, I'm going to be a pirate one day, but he actually did leave.

Sound of the Birds

just kind of relaxing and enjoying the day.

And he says 今日は, as for today,

船出 is the boat going out to sailing and 日和【changed from ひより】 is good weather.

It's good weather for sailing.

So it's a good weather for sailing.

これは、あの、船をこいでいる音と思います。 I think this is the sound of rowing the boat.

オールでこいている音と思います。 It's the sound of the oar paddling, I think.

and here's the monster that ate his mentor's arm.

出たか近海の主。相手が悪かったな So you've made your appearance, Lord of the Coastal regions. Too bad for you.

近海 that's nearby ocean or maybe

near the shore or the surrounding area, but not deep into the ocean like 沖

I guess. 沖縄の沖 would be farther out.

沖じゃない It's not open seas

would be further out.

So 近海の主 is the Lord of the nearby seas? (coastal waters)

相手が悪かったな (Too bad for you) your opponent is me

自分が相手だから、運が悪かった。 Since I'm your opponent, you have bad luck.

The fish you're unlucky because your opponent, meaning me, is too strong.

Too bad for you.

You got this opponent.

Now is this physical or can this also be mental training too?

うん、でもこの場合は体を鍛えたということだね。 Yes, but in this case, it is training his body.

Been working out and trying to to get stronger.

So look at my skill.

What skill I have after ten years of training.

ゴムゴム in Japanese that means kind of elastic.

ゴムが、伸びるゴム "gumu" is the elastic gumu

this is a pistol punch he had mentioned earlier

in the introduction that his punch, he was so strong.

And his mentor said, that that's not much.

そのときまだ小っちゃかったからね。弱かったの。 He was still small then.

But now his pistol punch is very strong.

バチン That's the sound of his arm coming back into position

do you realize it?

So you understand my power?

I guess, or my strength, you should respect me .

So, the め here is a very rude way of calling an enemy or belittling someone

ネコめも、悪い事しているネコ "neko me" for a cat that does bad things.

When the cat does bad things, she's a ネコめ

はい、まずは仲間集めだ。ぐるぐる Yes. First, I must gather my crew.

まずは First and foremost, 仲間 companions, or in this case, I guess his crew

so the gathering or the collecting or

finding of his crew and 十人 I want ten people.

そして海賊旗 And then a pirate flag.

海賊王におれはなる！どん！ A pirate king, I will become! Bam!

So it's kind of like mixing up the language. (for emphasis)

But one reason why we we can do this in Japanese is because of the particles.

We have the に and the は so we know who the topic is and what he will become. になる: Pirate King

まだ見ぬ、彼の仲間達を巻き込まんと小さな船は海をゆく A small boat sails the sea, hoping to bring the crew whom he has yet to see.

So this is more of a literature writing

style type of Japanese まだ見ぬ not seen yet.

It's a negative ender.

But it's very kind of classical.

And if you would in English.

彼の仲間達 so, his companions. So not yet.

巻き込もうと Okay, so I still haven't got them together.

And in his small boat you will go on the sea.

In such a way.

So, I hope you enjoyed this first little look at One P iece and we will have

to learn, read more and maybe watch the anime

because we have a no idea what's going to happen on the next page.

We haven't looked that far.

Let us know if you have any questions in the comments below and we appreciate it.