One of my (Clay) favorite traditional Japanese food is umeboshi.

This is also written with the り (hiragana that follows the kanji to complete the reading):

are usually roundish, red, wrinkled and about the size of a large grape. But there are many varieties found throughout Japan. Most are salty and very sour but some are a little sweet. It is often said to be very healthy, but it must have a very high amount of sodium. 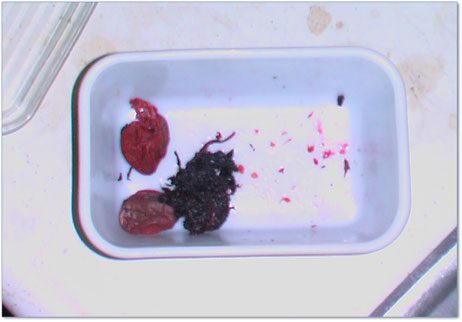 The above photo are the last two  in the Boutwell house. Yumi's mother will get more in the mail, but I'm afraid we will be -less for a few weeks. The dark clump to the right is called . It is from a plant (perilla; a beefsteak plant) and helps give a consistent and dark coloration. It is very tasty with umeboshi and rice.

Usually umeboshi is eaten with rice. A cup full of rice only needs one umeboshi to be full of flavor.

When one has a cold, thin, almost soup-like rice is served with umeboshi. This is called お

A common lunch box is called の which resembles the flag of Japan (a single  in the middle surrounded by white rice).

But perhaps most common is for to be found in おにぎり. おにぎり are rice balls often wrapped in のり (seaweed). Pitted can be placed in the center of the おにぎり for a very scrumptious snack.

You can buy  (Umeboshi candy) and soda made with umeboshi juice (probably all artificial flavors but it is good!)

A not so nice word is . I'm sure you can figure out what context it is used, but it means a prune-faced old hag. I don't suggest using it. Ever.